The China-SCO Local Economic and Trade Cooperation Demonstration Area will act as a magnet attracting 'business, tourism and culture' cooperation

The SCODA is a “national key task” granted to Qingdao by the CPC Central Committee to build a new platform for international cooperation on the Belt and Road.

In recent years, as Qingdao embarks on the new voyage of high-quality development led by opening up and innovation, the SCODA is leveraging its geographical and resource advantages, to accelerate the multimodal transport integrating the functions of seaport, airport and railway. The aim is to make all-out efforts in building an "interconnected international logistics center, mutually beneficial modern trade center, two-way investment center for mutual promotion, business, tourism and culture center for knowledge sharing, and marine cooperation center oriented to the future.

In the five sections, the “business, tourism and culture” is particularly important. Just as General Secretary Xi Jinping pointed out: "Friendship, which derives from close contact between the people, holds the key to sound state-to-state relations." The science and technology, education, culture, think tank, and people-to-people activities among SCO countries on the basis of “business, tourism, and culture” will enhance the cultural awareness and emotional recognition, thus gaining popularity among the peoples, so as to give full play of the platforms and promote in-depth cooperation.

Therefore, in the crucial period when the SCODA is gaining strong momentum, we must do the best to create a platform for SCO coordination and cooperation in science, education, and culture. In this way, the SCODA will be able to act as a magnet attracting cooperation in culture, education, science, and technology, and promote the bilateral and multilateral integration and coordination among SCO countries, from a higher perspective, in broader areas, and at a deeper level. The objective is to aggregate high-quality global resources, and build the SCODA into a key point of growth and strong engine, making Qingdao a new high land for opening up in the new era.

Promote personnel exchange in an all-round way, gather people flow, facilitate the prosperous development of business, trade, culture, and tourism, and play the role of the International Cultural Exchange Club for SCO countries.

Build a platform for cultural exchanges with SCO countries. The diversity and coexistence of cultures is the natural scenario of human society. Different cultures can only shine brightly, coexist in harmony, and prosper by exchanging, learning from, and gaining awareness of each other.

From the view of history, SCO countries enjoyed unparalleled geographical, cultural, and resource advantages. They created the ancient Silk Road where "envoys met each other on the journey, and businessmen were constantly traveling". The countries also shared historical bonds and cultural foundations. The cultures of different countries mingled and influenced each other.

From the view of geographical location, the SCODA is in proximity with Jiaozhou Bay, in the center of Qingdao’s comprehensive traffic network of “sea, land, air, and railway”. It is neighboring Japan and South Korea in the east and facing the Asia-Pacific Region, neighboring SCO countries in the west, ASEAN in the south, Mongolia and Russia in the north. Such geographical advantage makes the SCODA the perfect gateway seaport for SCO countries to access the Asia-Pacific region, thus providing convenience for the cultural exchanges of SCO countries.

We should actively explore the SCO countries' demand for cultural exchange and people-to-people communication, and build an international platform for training and exchanges. We will bring in the universities from SCO countries to participate in the building of the SCO Economic and Trade Talents Training Center, jointly organize SCO talent training on business, tourism and culture, undertake aid training programs for SCO personnel, provide training for the personnel from our friendly cities, and training for the financial and trade professionals of SCO countries. In this way, we will be able to promote personnel exchange in an all-round way, gather people flow, facilitate the prosperous development of business, trade, culture, and tourism, and play the role of the International Cultural Exchange Club for SCO. 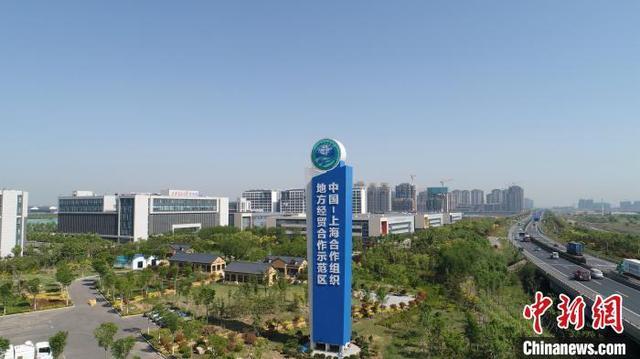 The Fifth Plenary Session of the 19th CPC Central Committee emphasized that “we will strengthen our science and technology to provide strategic support for China’s development”. For one thing, we must adamantly promote independent innovation, keep strong faith in innovation, and work hard for the independence of and control over key and core technologies, so as to firmly hold onto the initiative for innovation. For another, the emphasis on independence by no means equals closure and isolation, rather, it means to implement more open, inclusive, and mutually beneficial strategies for international science and technology cooperation.

Making all-out efforts to build the SCO Economic and Trade College, cultivate pragmatic talents with an international perspective and a future orientation, thus gathering an abundance of high-end talents of SCO countries

Since the establishment of the Shanghai Cooperation Organization, despite vast changes, it always maintained steady growth momentum and has become the largest regional organization in the world, covering 60% of the Eurasian continent, with a population of over 3.2 billion, and one-fourth of the global GDP. Behind the active trade exchanges, strategic cooperation, and information exchange among SCO countries, are high-level international talents of various areas. As SCO further expands in many areas, we need more and more talents who excel in languages, cultures, and international rules to participate in the new round of international competition and cooperation.

We should set up SCO education alliance, and SCO Internet-based college, build a regionally integrated education platform, and “education green channel”. We should also promote mutual recognition of credit, course sharing, academic seminars, so that students from SCO countries could freely and conveniently benefit from the education resources of different countries, thus truly realizing convenient and beneficial education exchange among countries. We should also actively participate in building real SCO universities, make all-out efforts to build the SCO Economic and Trade College, cultivate pragmatic talents with an international perspective and a future orientation, thus gathering high-end talents of SCO countries.

Planning and design of the 10-km2 core area of SCODA. (Picture provided by the Administrative Committee of the SCODA)

On the basis of institutional and policy innovation, build an open international research platform, enabling the “flowers of wisdom” of SCO countries to bloom, adding vitality to SCO and momentum to the world

Build a think tank platform serving SCO countries. Since the COVID-19 pandemic, SCO countries stood firmly with each other, joined hands to fight the pandemic, not only protected regional development and stability but also actively created new momentum for SCO development in the post-pandemic era.

In recent years, as the Belt and Road Initiative progresses, the China-Europe freight train brought significant growth to cross-border trade, and the investment scale also grew. Statistics show that in the first 10 months of 2020, the trade volume between China and other SCO countries was nearly 200 billion USD. On November 30, The 19th Joint Communique of the Council of Heads of Government (Prime Ministers) of the SCO Member States pointed out that, "SCO countries will work for the deep level connection between jointly building the Belt and Road with the development strategies of various nations, and regional cooperation initiatives such as the Eurasian Economic Union, thus keeping smooth regional economic circulation." Shanghai Cooperation Organization has a bright prospect.

As the new platform for Belt and Road international cooperation, how should the SCODA play the role of a pioneer in guiding the global personnel, goods, capital, information, technology, and culture to flow through, come into and go out from Qingdao, thus yielding international influence, and truly forming an opening-up pattern featuring compatibility between the east and the west, coordination between land and sea, home and abroad. This has become a hotspot and challenge in front of us.

We must leverage the pivot advantages of the SCODA, build an international think tank alliance of “China + SCO countries”, attracting SCO think tank teams, and gather the wisdom and strength of SCO countries. This alliance will focus on the economic and trade cooperation, cultural strategies, financial and energy cooperation of the SCODA, study the nations, discuss and initiate institutional arrangements for regional economic cooperation, on the basis of giving full play to the nations' resources and comparative advantages. On the basis of institutional and policy innovation, we should also build an open international research platform, regularly organize high-level international academic forums, producing duplicable and distributable “SCO achievements” and “SCO experiences”, stipulate lists of institutional and policy innovation suggestions, and regularly issue The White Paper on High-level Economic and Trade Development of the SCODA. In this way, we aim to promote the high-level opening up and high-quality development of the SCODA, enabling the "flowers of wisdom" of SCO countries to bloom, adding vitality to SCO and momentum to the world.